Made, Not Born: Rebecca Harvey’s
Path to Leadership 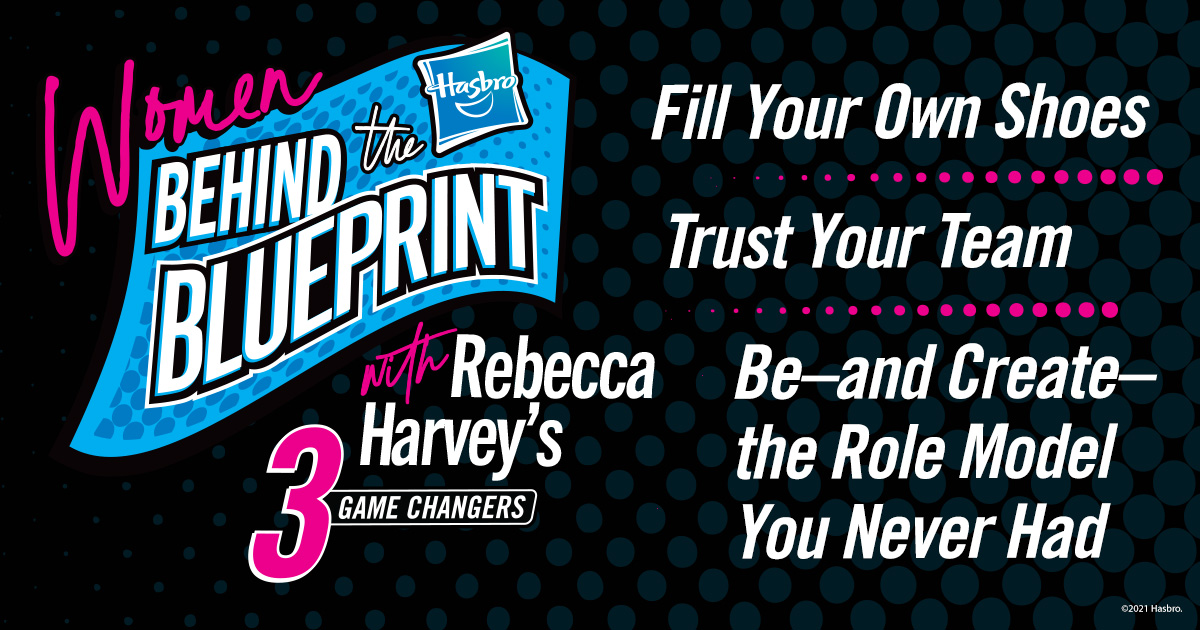 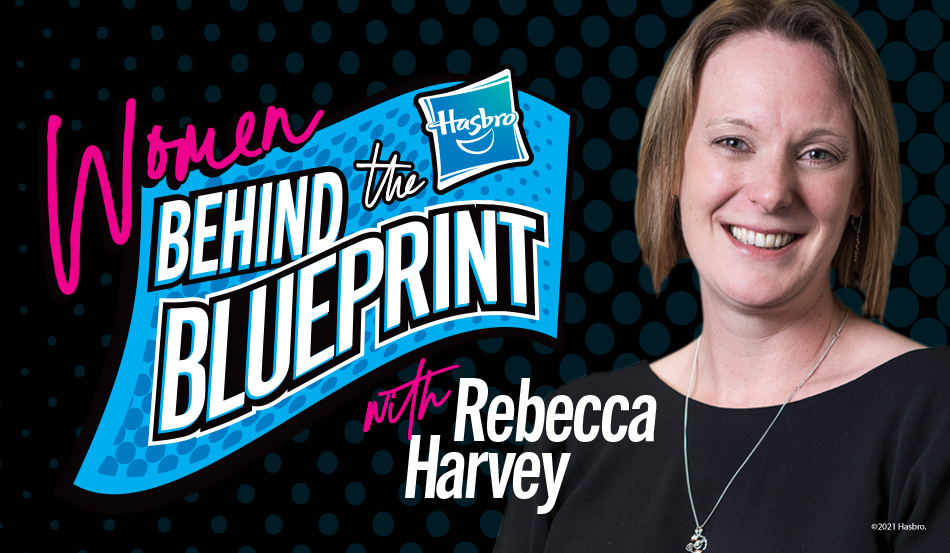 For a long time, I believed that you were either born a leader or you weren’t. And I was pretty sure I wasn’t.

The essential qualities of leadership didn’t come naturally to me. As a young woman, I struggled with self-confidence. The idea of speaking to a group of people—let alone leading them—made my face go red and my pulse race.

Today, from my office in London, I manage a team of more than 50 people, spread across seven countries. As EVP of Global Brand & Marketing at eOne Family Brands, I help global audiences connect with some of Hasbro’s most iconic brands.

In our inaugural Women Behind the Blueprint piece, my colleague Deb Thomas wrote about the experiences that have helped shape her into the leader she is today. Put another way, she shared her leadership origin story.

In this piece, I’d like to do the same—to share three lessons I’ve learned over the course of my career that have helped me become a confident and capable leader.

Fill Your Own Shoes

When you’re a woman learning to lead, you can face a lot of pressure to conform to the management styles of your colleagues, the majority of whom are usually male. I certainly did. Early in my career, I often found myself communicating, delegating, and managing as I’d seen others do.

Of course, there’s a lot you can learn through imitation. I still rely on a few of the leadership techniques I picked up from mentors and supervisors in those early years. But I have crafted most of my leadership toolkit myself—upholding my values while learning from others’ mistakes, including my own, and listening to and applying feedback positively.

When a fantastic female colleague of mine at eOne, Kezia Williams, was promoted to Managing Director for UK Film, I realized even more significantly how important it is to actively chart your own course as a leader.

The former Managing Director, Alex Hamilton, left big boots for Kezia to fill. Alex was well-loved by his team and had a reputation for having a big personality and doing things a certain way. Replicating all that, I remember thinking at the time, would be a real challenge.

To my surprise, though, Kezia didn’t even try (or certainly it didn’t seem that way). While she kept some of Alex’s practices in place, Kezia introduced a new dynamic to the team—a dynamic that fit her personality and leadership philosophy. Instead of replicating, she reinvented.

In almost no time, Kezia became one of the most popular managers in the company, certainly in my perspective—not by filling Alex’s shoes, but by filling her own.

As a leader, I’ve tried to do the same. It’s important to learn from leaders you admire, and to adopt their best practices that inspire you. But, as Kezia demonstrated, it’s just as important to develop a model of leadership that is authentically yours—not just for your own benefit, but for the benefit of those you lead.

Authenticity is one of the cornerstones of effective leadership. When leaders stay true to their values, they encourage a culture of candor and enable greater creativity, collaboration, and performance. 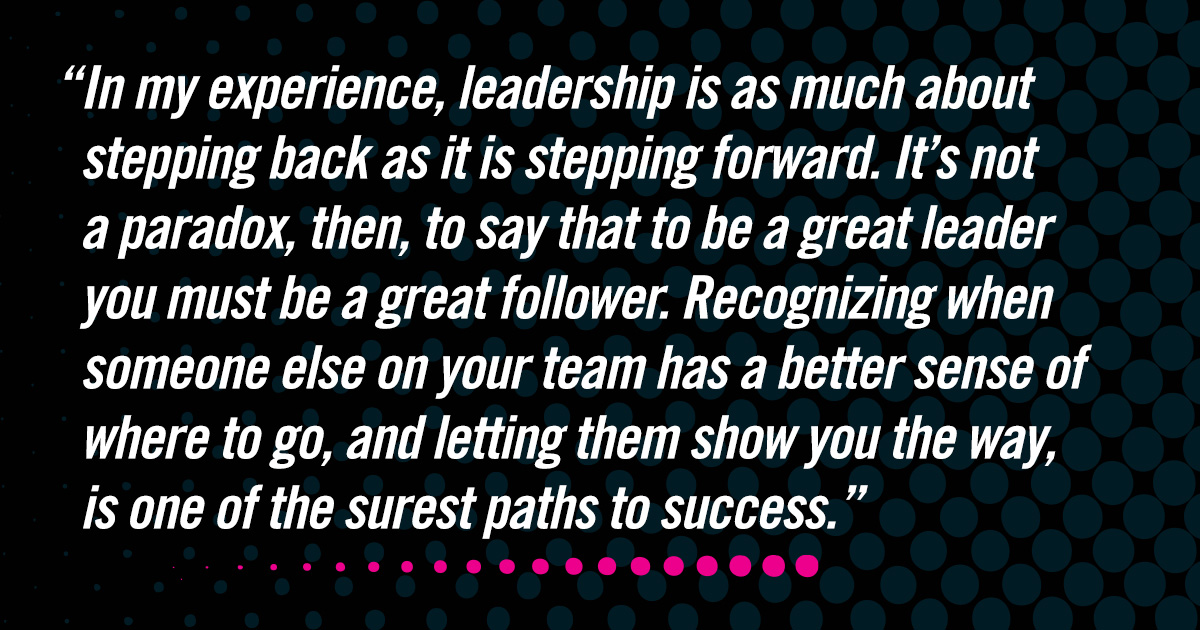 As a leader, it can be tempting to think that since the buck stops with you, all decisions must be made by you.

Nothing could be further from the truth. No one can move mountains on their own. Over my career, I’ve repeatedly found that the best results come from empowering others to take charge.

A few years ago, I was given the chance to co-lead the expansion of the Peppa Pig brand in China by recruiting a local team. It was an exciting opportunity; I was incredibly proud of the character we’d helped create and was thrilled to have the chance to introduce new audiences to her courage and heart. But I knew that to succeed, I’d need some help. Increasing Peppa’s footprint in China would require deep knowledge of the country’s culture and customs—knowledge that I didn’t have.

So I recruited Frida Zhang. Frida is an entertainment and marketing expert who lives and works in Shanghai. In our first meeting, I asked Frida a simple question: “What do you think it will take for Peppa to succeed in China?” I listened—but in the months and years that followed, I’ve done more than that. I’ve deferred to Frida’s experience and strategic sense more times than I can count and our brand management teams have utilized her knowledge to develop culturally relevant content that sets the brand apart in the Chinese market.

This has paid off considerably. As many of you know, Peppa Pig is now a sensation in China. Episodes of the show have been streamed more than 60 billion times in the country. We’ve sold more than 40 million Peppa Pig books written in Mandarin. And countless families have made lifelong memories at Shanghai’s Peppa Pig World of Play theme park.

None of that would have been possible without Frida, or the rest of the Peppa China team.

In my experience, leadership is as much about stepping back as it is stepping forward. It’s not a paradox, then, to say that to be a great leader you must be a great follower. Recognizing when someone else on your team has a better sense of where to go, and letting them show you the way, is one of the surest paths to success.

As children, we make sense of the world—and our place in it—through stories. Stories show us what it means to be brave, cooperative, and generous. They help us understand big, complicated feelings like anger, sadness, and loss. And they give us some of our earliest role models.

The people we become as adults are determined by the stories we learn from and the characters we look up to as kids. Our horizons—of ambition, of understanding, of empathy—are set at an early age.

Growing up, the heroic characters I looked up to—the ones who saved the day and vanquished the bad guys—were almost all male. I didn’t have many female role models onscreen. Instead, I had to settle for He-Man!

All of us—but especially leaders—share a responsibility to create that reality. If there aren’t enough role models on your team, become one yourself. Play an active role in training, mentoring, and encouraging junior colleagues. Be the role model you wish you had.

But don’t stop there. Working at Hasbro, we have an incredible opportunity to help shape the future of entertainment and play for a generation of kids around the world. We can seize that opportunity by giving more kids more characters like them to look up to—characters like our upcoming Kiya, a courageous South African superhero, or the cast of our new My Little Pony movie. These characters display courage, resilience, determination, and while they are very real and have their own flaws, they stand up for what they believe in—inspiring a new generation of kids.

When we create these role models, the impact is huge.

My daughter has always been shy. It’s been one of my greatest joys watching her become more confident and more willing to stand up for what she believes in.

We still have far to go in the fight for gender equity, but it’s a blessing to be able to see, through my daughter’s eyes, just how far we’ve come.